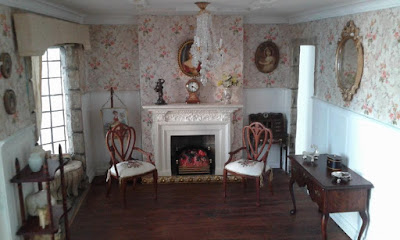 After a little summer break, it's a new term and a new post.  I thought I'd show you around the drawing room today.  Daviot House has two drawing rooms (two!).  This was not particularly planned (nothing ever seems to be), but grew out of necessity when I realised that I was trying to put 'two rooms into one'.  I had a similar problem with the dining closet, which morphed into a breakfast room and a dining room (more about that another time).

The drawing room on the first floor has a lovely bay window with a window seat.  I have yet to finialise the curtain situation - for the moment we have a temporary curtain.

The room itself is not very large; 28cm squared, so there have been quite a few constraints.  The biggest problem for a small room is the lighting.  Especially chandeliers.  Most which are available to buy are either too big, or too flashy - Daviot House is not Versailles! So I worked out how to make one that would be just the right size without overpowering the room, or hitting the inhabitants on the head as they walked past.

Mostly I wanted to show you this room because it contains quite a few of my treasures.  When I started this blog, it seemed that many people had bottomless pockets to spend on their passion - it still seems that way when I read about people spending thousands upon thousands on a house and contents.  That is not to judge, only to say that it can sometimes be disheartening to a collector with a budget, that our houses just won't be up to scratch.

Ten years later, and I realise that the joy of collecting something is not the ability to spend outrageous sums in an instant, but the gentle coming together of treasured items.  Items that hold meaning, because they were a present, or a fantastic find.

The miniatures that give me the most pleasure are those that didn't even know they were treasures.  And most of them can be found in the Drawing Room, the most elegant room of the house.

I have always had dolls houses in my life, but my first real 'treasure' was given to me when I was twelve years old.  After a visit to the dentist, my mother and I went to the library where there was a miniatures exhibition.


I can't remember much about it, who the exhibitors were, but I came home with the tiniest blue and white plate.  Twenty seven years later, I still have the plate.  It has travelled as much as I have, kept in a jewellry box during the years when I didn't have a miniature house for it.  It has been to boarding school, university, and it even came with me when I moved to France, before I even knew I would become so passionate about miniatures.

I have searched in vain for the maker over the years.


Two years ago I was trawling on ebay for items and I found a job lot of vases for auction - nothing particularly interesting, mostly imported, but the price for the bundle was a few pounds, and I thought that I would add them to my stash.

When I received the order in the post, I was astounded to see that among them, glittering with the most delicate gold, was a perfect vase.  And on the bottom of the vase was the same maker's mark as on the little blue and white dish from many years ago! 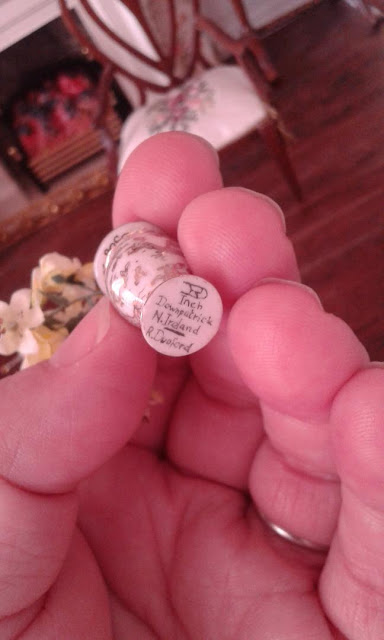 My heart leapt, and the vase today has pride of place in the Drawing Room, a testament to the joy that my miniatures have given me over the years.

They may not be the most expensive, rare or sought after, but each item in Daviot House represents much more to me, and I do hope that you find many treasures that give you joy for your miniature houses. 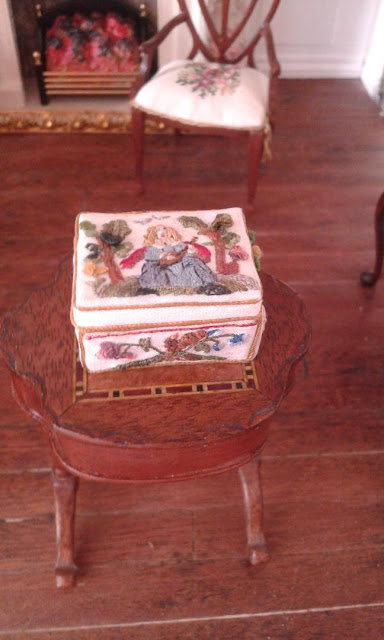 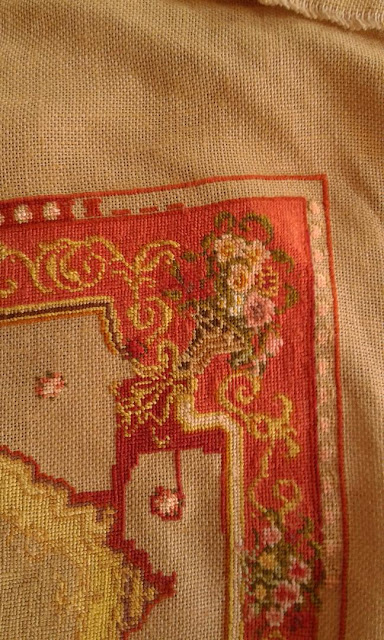