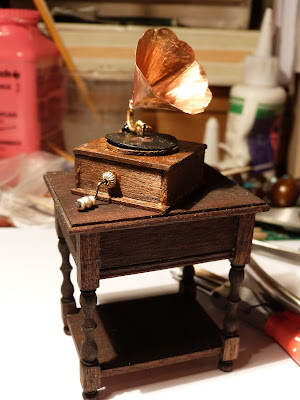 First of all, thank you so much for your really kind comments and emails, it was so supportive, and I hope you are enjoying the giveaway challenge in the previous post - you have until the 1st of September!

While I was in hibernating mode, I thought a lot about Daviot House and where I am going with it.  I came to a bit of an impasse with the hall, as after making lots of things and collecting more, somehow it just didn't feel 'right'.  I'll tell all in another post, suffice to say that I felt a little constricted by the time frame I had given myself.

Recreating a period miniature can often feel restrictive and I often found myself looking at the rooms of Daviot House and thinking they didn't look very comfortable at all!  I also kept wishing that I could use things I really love - lamps, photos, games and books etc. that just didn't fit into the 18th century landscape.

I really wanted to have a gramophone, a large old fashioned one with a beautiful tulip horn.  And after a year of saying to myself that it wasn't Georgian, I decided to just make one, and see what happened.

I just used things that were lying around my workspace;

I made a box out of lolly stick wood and used two squares of matboard for the top and bottom.  I painted this brown with watercolour paint, and gave it a very thin coat of matt mod-podge.

I also used matboard for a disc base, and pushed part of a head pin through the centre.

I cut a cone shape from cardstock, and fiddled about a bit until I got the shape I wanted.  Then I used the template to cut out the very thin copper sheeting.  I would have prefered brass, but copper was all I had, and I kind of like the warm colour.

Using jeweller's glue, I stuck the copper horn onto a piece of earring that had a nice bend, for the needle arm.  This part was REALLY fiddly, and I lost patience quite a few times!  You definitely need to dry this overnight.  Gluing the earring onto the gramophone base also produced a few swear words, but it worked fine in the end!

I threaded a tiny bead onto the rest of the head pin, and then bent the pin into a crank handle shape.  I didn't glue it in, and so the handle actually turns!  The next time I make one I will try to get the turntable to turn as well, though that could take quite a bit of mini- engineering.

I am quite pleased with the result, it certainly brings Daviot House into the 19th century, and I really like the effect.  I decided then that I would put into my house anything that I liked, whether it was 'period apporpriate' or not...as long as it looks comfy and cosy, that's enough for me! 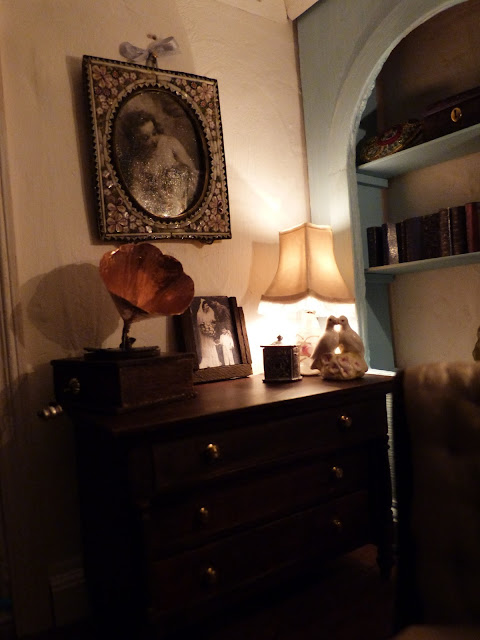 I could definitely improve upon it, and it is a shame that I didn't take any photos of the process to write a proper tutorial, but you are all very talented miniaturists, so I guess you can work it out and make it even better!

Posted by Jonquil at 3:15 PM 12 comments: Links to this post 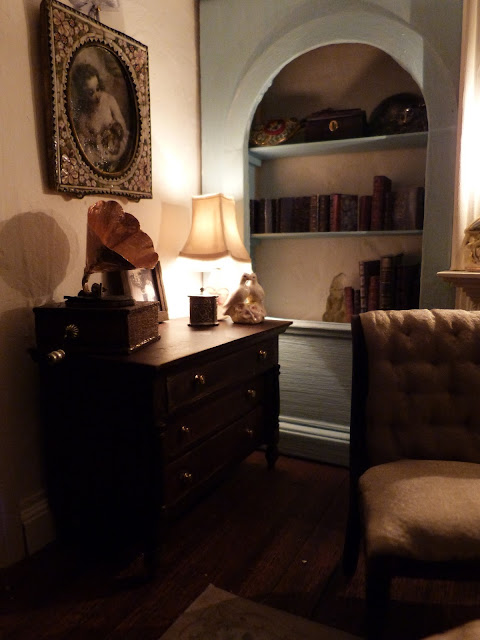 
What a big break I've had!  I wish I could say I spent it on a tropical island, but sadly no .... after a LOT of work stress in June and other things, I finally had a little bit of a burn out, and my creativity flew out of the window.  I had to have a very big rest, and it has taken me two months to get back to creating.

But never fear, I have been creating!

It has been such a lovely feeling to come back to my blog and see that I now have 200 followers.... a long way from the first (thank you Josje), and although I don't do this blog for the popularity stakes, I do really, really appreciate every one of my followers.

So, a little giveaway is in order, n'est-ce pas?   But not your average giveaway, a little game.  (I have spent a long summer with my toddlers, can you tell?)  Here are two photos of the Daviot House parlour.  The first was taken a year ago, the second, today. 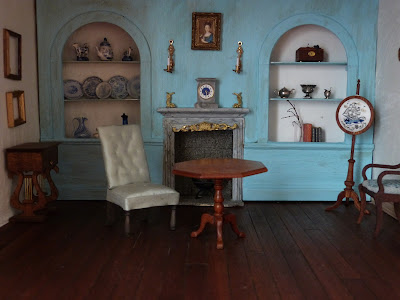 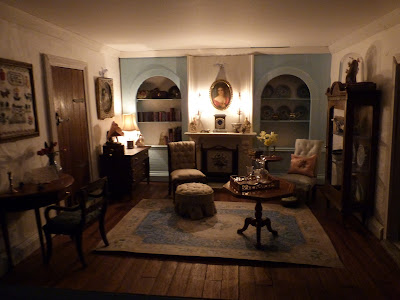 To enter the competition, you should leave a comment telling me how any new things you can see ( you don't need to list them, a number will do!)  It's a bit like guessing the number of beans in the jar, but hopefully slightly more satisfying!  The competition will end on the 1st of September.

The person who spots the correct number of differences will win the giveaway - which is a surprise!

Posted by Jonquil at 9:18 PM 29 comments: Links to this post