Just as the dark days of November draw in, and everything seems slightly grey and dull, I thought I'd surprise you and share my latest stumpwork project - a little box. 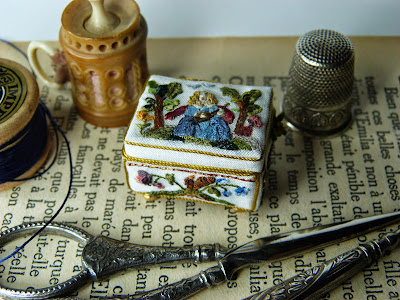 As you know, I am completely incapable of using wood, so I used a 'just a box' kit from McQueenie's miniatures, a fairly small and simple thing made from mahogany.  I started with the lid panel, and based my design on a motif that is often seen on 17th century caskets,  a lady with a lute. 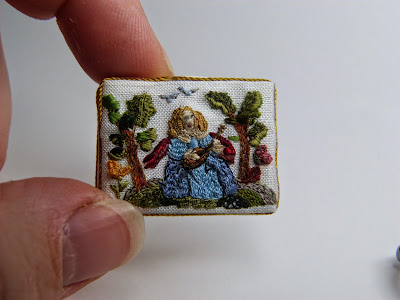 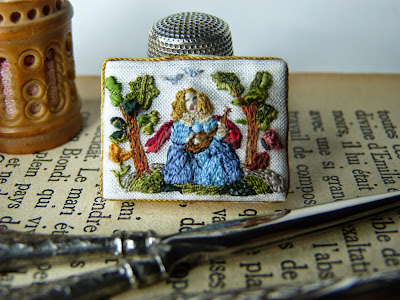 As you can imagine, trying to capture the tiny stitches with my camera was nearly impossible, especially the detached leaves and flowers, so I hope you can see everything that went into it!  Her face was particularly difficult, but I managed to get at least an impression of facial features.  I had a lovely time doing her hair in twisted buttonhole bar stitch, it gives the hair a little movement, and really suggests ringlets.  I had tried curling thread over a very fine needle and setting with starch, but I really don't recommend this method on this scale, it was very messy and frustrating! 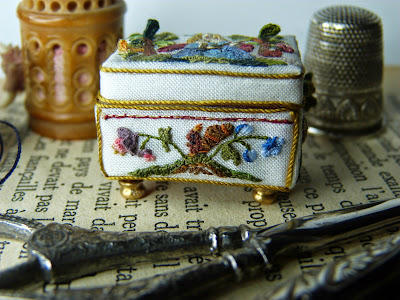 The front panel motif is a red squirrel with a lovely stripy tail, I am oarticularly fond of his excessively fluffy ears!  The fuschia flower on the left was inspired by a plant in my garden, which has been giving me so much delight in the grey of Autumn, as it is screamingly pink - I had to tone it down a bit here!  It is constructed of brussels stitch over the end of a very small stiletto, and three detached purple petals, so though t doesn't look like it in the photo, the flower is very 3D. 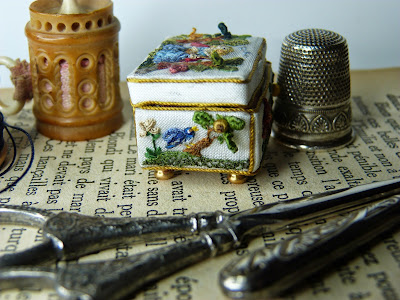 A tiny blue tit on a pear tree, also inspired by my garden.  The pear is a silk wrapped seed bead with tiny French knots at the bottom.  The grass is triple brussels stitch. 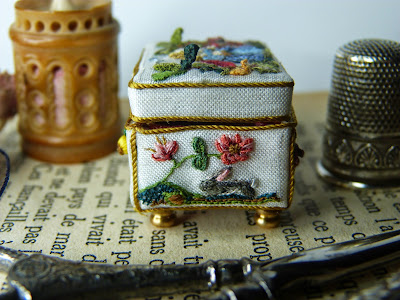 Sadly, I don't have a hare in my garden, but I do like this one, bounding about with his ears flapping in the wind - I couldn't bear to embroider a hound chasing him, as you usually see in 17th century embroideries! 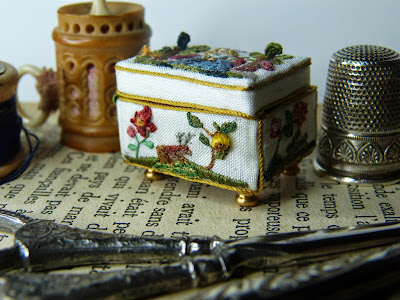 The back panel has a Christmas rose, a stag and a quince tree, which make this panel feel quite Wintery, though the quinces have just been in season here.  It is a wonderful fruit, and I love making quince cheese in the Autumn.  This quince has been constructed in the same way as the pear, and the Christmas rose has leaves of detached picot.  The stag doesn't photograph well at all, which is frustrating, as it had very intricate work, but this is the best shot I coud get!

Sewing the panels was great, I really tried to use as many different stitches as I could without overwhelming the scale, as this is really easy to do.

Making up the box, however, was a horrible experience, as it was nervewracking cutting so close to the panels!  The buttonhole twist used to finish the edges was extremely difficult t o get straight, which is an absolute must in 12th scale, as otherwise any slight wiggle looks really clumsy.  I have learnt a lot though, so then next one I tackle shouldn't have so many problems.

I hope you have enjoyed it!